The news of losing both Chadwick Boseman and Curt Vendell hurt and hurt badly as their contributions to the collective community are as meaningful in both number as they are in prolific and lasting impact.

With that, we reflect on the respective contributions from both and pay our due respects, then it’s back to business as usual with gameroom updates, spending some of Brent’s money, discussion on the new Pixel Planet Arcade that is opening soon in TN and we speculate a bit on the newest game release by Stern Pinball (Avengers: Infinity Quest).  Add to all of that and we feature a panel discussion (entitled “Dan Kitchen’s Goldrush”) from the 2019 Portland Retro Gaming Expo where Dan Kitchen talks about his upcoming game for the Atari 2600 (it’s a sequel to Activision’s Keystone Kapers) and is joined by his brother Garry Kitchen and prolific game designer David Crane.

Wherever you are in the world – we thank you for listening and hope that you and your family are safe and continue to be in good health.

We hope you enjoy the episode!

88 MPH…this is a once-in-a-podcast opportunity, and we’re not going to waste it… so you (our beloved listeners) are squarely along for the ride! (see what we did there!?!)

BTTF references aside (and trust us – we love them), there’s right at 4 hours of podcasting goodness for you this month and we cover so many topics, we thought it best to just list them out for you straight away:

END_OF_DOCUMENT_TOKEN_TO_BE_REPLACED

Here we are – at the end of another year and with that comes a bit of reflection and some looking forward to what we hope will be an excellent 2020.  We have a bit of a mash-up show this month as we draw December to a close – we square off on our monthly updates just as normal, but we then detour a bit and get right into what we think is some great “New Years Eve humor” courtesy of Cale Hernandez (of Marco Specialties) and Mike Vinikour (of Stern Pinball) as Brent and I had some time to sit down with them at the 2019 Grand Ole Gameroom Expo last month and talk about quite a few subjects besides pinball – it’s good fun and the guys there never disappoint.  We also spend some time with Patrick McKennon (of Music City Pinball) as he tells us about his newest venture – a combined pinball & arcade “destination” location that is coming to the Nashville area in 2020.

We are also proud to announce a Christmas contest, made possible by Brad Hunter of Lit Frames.  Be sure to enter before Feb. 15th for your chance to win one of 25 limited-edition Superman ’78 translites signed by renowned pinball artist Christopher Franchi!  Full details are available here - https://www.brokentoken.com/contests/win-a-superman-78-translite-courtesy-of-litframes/

We hope you enjoy the show – thank each and every one of you for the support this past year and we look forward to a great 2020!

END_OF_DOCUMENT_TOKEN_TO_BE_REPLACED

8
by Whitney Roberts in Contests
Merry Christmas everyone! Now that all the presents have been unwrapped, it’s time to put the socks away and give our Christmas contest a go!
Brad Hunter from Lit Frames has been gracious enough to sponsor our prize – a Superman ’78 translite signed by renowned pinball artist Christopher Franchi! 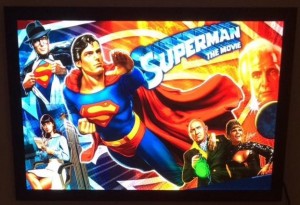 This is a very-limited run (only 25 were made) and we’re lucky enough to have Brad set one aside as a giveaway for us.
So – how do you enter? It’s “Super easy” because all you have to do is guess a number between 1 and 1000, get your guess to us and wait for the Feb. episode where Whitney will announce the winning number that is sealed in an envelope that sits in the coin bucket of Brent’s Tempest.

We’ll keep the contest open until midnight EST Feb. 15th. so everyone has an ample chance to enter.  It’s “Super fun” (see what I did there…again??) to play along, as there’s only a few rules and caveats to abide by: